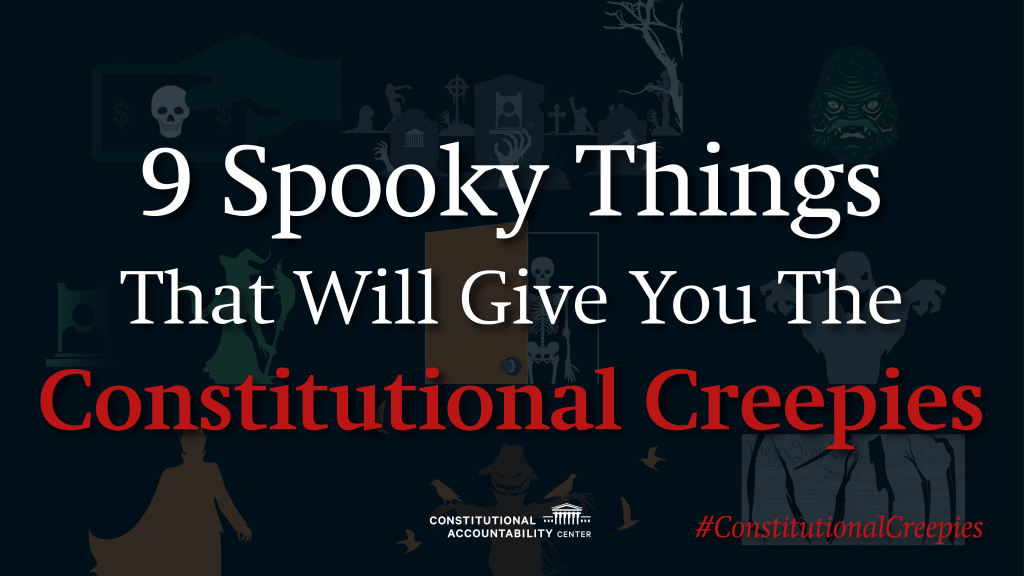 I wrote a Halloween-themed blog for CAC, which was published on the organization’s website. I also designed a social media campaign to accompany the blog.

Since he first took office, pop culture writers have likened President Trump’s rise to power as a plotline from a scary movie, with one writer for the Los Angeles Times openly comparing the Trump presidency to “a horror movie come to life,” in which “cheap jolts and jump scares abound.” Even renowned author Stephen King, the master of horror himself, answered affirmatively when asked whether he thought the Trump presidency was scarier than any of his novels.

Yet perhaps the scariest thing about our current moment is not Trumpism itself, but what has been summoned into the political mainstream in the last four years. Of course, some of these elements were not conjured solely by the current occupant of the White House. They have been lurking under the surface, waiting for the most opportune time to come out and wreak havoc on our constitutional democracy.

So in the spirit of Halloween and all things spooky, here are 9 things guaranteed to give you the constitutional creepies:

Dark money has maintained a grip on our political system that has only tightened since the Supreme Court’s ruling in Citizens United v. Federal Election Commission that the First Amendment’s free speech clause prohibits the government from restricting political campaign donations on behalf of organizations and corporations. It remains clear that the ruling continues to engulf our political process in a thick, ghastly fog, distorting the voice of the individual American voter like a reflection in a funhouse mirror.

Senate Majority Leader Mitch McConnell held open more than 110 judicial seats for the duration of President Obama’s presidency—including a Supreme Court seat—allowing them to be resurrected as vacancies for President Trump once he took office. This is scary for constitutionalists because this practice would have been unthinkable if our lawmakers faithfully abided by the rules and norms of our democracy. This set the stage for the Trump Administration to engage in court packing, thereby changing the ideological makeup of the federal judiciary for generations to come.

During his presidential campaign, President Trump emphatically claimed that he would “drain the swamp.” But if one takes a good look at the people in his inner circle, swamp creatures lurk all around. These creatures were roused from their lagoons of luxury to submerge government agencies under their control, the same agencies they once criticized as highly-paid industry lobbyists.

In a move that was an affront to both rules and norms, Senate Majority Leader Mitch McConnell cast a spell over D.C. and made an entire Supreme Court nomination disappear, blocking the Senate’s consideration of President Obama’s nominee for the Supreme Court, Judge Merrick Garland. This was one of the foreshadowing, prequel-like moments of what was to come—Trump was not yet President, but as Senator McConnell watched him test our political boundaries and nevertheless ascend through the primaries, McConnell concocted a ready-to-fill seat on our nation’s highest court for his party’s nominee to fill.

The Trump Administration may have taken deliberate steps to conceal its skeletons in the closet, but Congress has the power to issue subpoenas to pry open the door. And it’s chilling to think what they might find behind it once they’ve turned the key in the lock, given the trapdoors, false bottoms, and mazes installed as barriers to excavation of the truth.

President Trump holds a record number of officials floating through the highest ranks of government agencies in his administration who have not been confirmed by the U.S. Senate, as mandated by the Constitution. They do not truly exist on this plane or the next one, they are just there. And they will haunt us and their agencies until new cabinet members are confirmed by the Senate to take their place.

Not only did President Trump refuse to divest from his businesses when he took office, but he has actively promoted them. This is an especially unsettling drain of foreign government and American taxpayer money into Trump’s pocket. The President should not be using his public office to inject a new flow of money into his family’s private assets, something that the Constitution’s Foreign Emoluments Clause prohibits.

The only thing scarier than watching a President thumb his nose at the Constitution and the rule of law in our country is seeing officials who swore to uphold the Constitution standing idly by, in spite of President Trump’s anti-constitutional cawing. Lawmakers. Judges. Cabinet officials. Instead of righting the wrongs of this President, they sway ever so slightly in the wind.

When drafting the Constitution, as amended over more than two centuries, each generation of Framers has taken great care in weaving into its text, history, and values a system of checks and balances, separation of powers, and guarantees of freedom and equality, all intended to ensure that our democracy would endure. Since he first took office, President Trump has repeatedly cut and slashed at the fabric of our nation’s founding charter. If we do not hold him accountable, the Constitution may not recover from the damage.

It’s downright unsettling to see how quickly the state of political affairs has devolved in the last four years. But scary movies don’t have to end badly. We don’t know yet what the future holds. Either way, as we prepare for Halloween this year, we can all agree we’ve been tricked enough by the Trump Administration. It is past time for Congress and the courts to give We the People, and our Constitution, a long overdue treat.